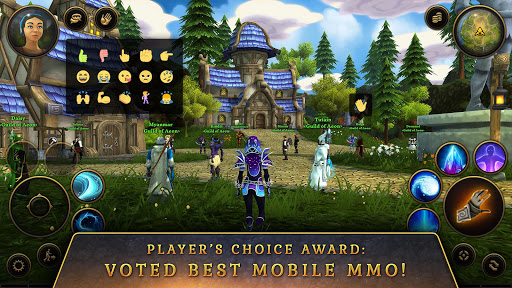 Journey to the Blighted Isles in the latest expansion of Villagers & Heroes! Discover the secrets of the four blights, Shade, Death, Blood, and Ash, and discover the ancient mysteries of these long forgotten islands. Along the way, collect protective wards, powerful ‘bane’ runes, and recipes that allow the creation of mythic gear — all necessary before facing off against Queen Zoria’s nasty Bounty Hunters in a thrilling new max level raid.

The wicked wraith, Captain Theobald sails the Blighted Isles in search of souls to reave. He has brought with him Queen Zoria, the insect Queen, and Slarissa, a servant of Mallok himself.

Join hundreds of thousands of players worldwide in an epic MMO in an expansive 3D world filled with swords, sorcery, dungeons, dragons, wizards, warriors, quests galore, countless beasts, and people from all over the globe.

★ A real MMO, without auto-play! Join a 3D world, where players are active and participating, with none of those silly auto-play mechanics.
★ Explore a Massive World with Thousands of Story-Driven Quests
★ Party-up with Friends to Raid the Lairs of Mallok’s Brood of Horrors
★ Ride to Glory on a Nightmare Steed, a White Stallion and more
★ Forge your own Weapons and outfits, enchanting them with exactly the Magical Spells and Heroic Feats you choose
★ Level up your Talents to unleash Ultimate Abilities on your enemies.
★ Craft, Garden, Ranch, Fish, Mine and more
★ Build the Mightiest Village in the Seven Realms
★ Seasonal Event Challenges
★ Play seamlessly between Mobile and PC

Developer Statement
We engage with the community via interactive livestreams, social media, and forums. We believe our players are the best evangelists for the game.

Our goal was to build a game world where everyone is important, whether that is a heroic warrior who likes to raid, or a player who prefers crafting, fishing, tending the garden, and working with others. That’s the reason the game is called “Villagers and Heroes”. Even a villager can be a hero.