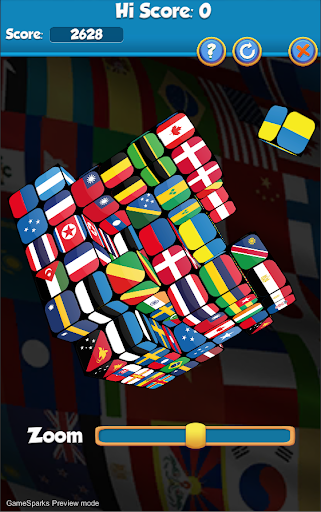 Cubeology Flags Download Apk + Mod version for android: Cubeology Flags is a 3D picture cube matching puzzle game in which you select pairs of cubes with matching flag designs. When you match cubes with the same flag they are removed, and you continue matching two cubes at a time until all the cubes are all gone, either for points or against the clock.

It has 6 different game variations, which can be played in either a cube layout or a sphere layout, with either free or fixed rotation, making for 18 game variations in total, from relaxed ‘play at your own pace’ to nail biting against the clock game types.

There is also a ‘Name That Flag’ mini game.

Colourful graphics, catchy soundtrack and addictive gameplay make this a fun puzzle game that you keep coming back to time after time.

Includes a zoom function to make it easier to play on smaller devices.

Upon successful completion of games you have a chance to gain cloth scraps or complete flags.

Collected flags are stored in your flag collection and give a bonus to your score when you match cubes with the same flag as one that you have collected. The more your collection grows the greater the potential score bonus, and you can collect multiples of the same flag to further increase your bonus.

Standard Game
———————
Remove cubes by matching pairs of same flag cubes until there are none left. Earn extra points by matching multiple pairs in quick succession. No time limit. Your score in this game can be increased by collecting artifacts.

Timed Game
—————-
Select pairs of matching cubes until there are none left. Initially there is a 15 minute time limit in which to finish the cube.

Speed Cube
—————
A fast paced game with a smaller 3×3 cube block and a 30 second time limit. How quickly can you clear the cubes, quick thinking and fast reactions will be required to top the leaderboard. Holder of the weekly best score is displayed on main menu.

Cube Builder
—————-
The idea of this game is different in that you start off with just a few cubes and more are added as time goes by. The rate that cubes are added increases as time passes and the game is over when the block is fully rebuilt. Your goal in this game is to keep the block from being completed as long as possible and in doing so earn as many points as you can. As in the standard game extra points are awarded for matching pairs in quick succession. Your score in this game can be increased by collecting artifacts.

Picture Search
——————-
This is a memory version of the standard game, in which all the designs are hidden and are only revealed when you click on the cubes. If you select two cubes that match they are removed as usual, otherwise the pictures are hidden again. Your score in this game can be increased by by expanding your collection of flags.

MatchIt!
———–
With this version of the game you have to find and select two cubes that have the same design as shown at the left of the screen. You have a limited time to find them and if you run out of time you will lose 10% of your current score, and you will be presented with another design to find. You can use the PASS button at the top of the screen to skip any that you are struggling to find without losing any score, but you only have 5 passes.

In all versions of the game that award points except MatchIt! , making incorrect matches will deduct some points.
Fixed bug that caused achievement details to be displayed incorrectly.