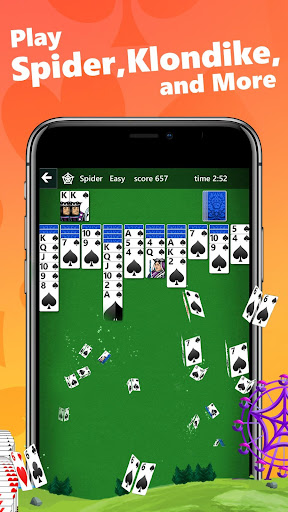 Microsoft Solitaire Collection is played by more than 240 MILLION people and has remained one of the most popular card games in the world for over 25 years!

KLONDIKE SOLITAIRE
♠️Klondike Solitaire is the king of all timeless classic games.
♠️Clear all the cards from the table using one or three-card draw. Also try out Traditional or Vegas scoring!
♠️The BEST way to play Solitaire classic free.

SPIDER SOLITAIRE
♣️Eight columns of cards await you in Spider Solitaire. Clear them all with fewest moves possible.
♣️Play single suit or challenge yourself with four suits!
♣️Come play Spider Solitaire free – it’s a great way to train your brain!

FREECELL SOLITAIRE
♠️The most strategic of all the Solitaire card games
♠️Use the four free cells to move cards around and try to clear all cards from the table in FreeCell Solitaire.
♠️FreeCell Solitare rewards players who think several moves ahead.

TRI PEAKS SOLITAIRE
♣️ Select cards in a sequence, earn combo points, and clear as many boards as you can before you run out of deals in Tri Peaks Solitaire.
♣️ A fun spin on the world’s most loved classic games.
♣️Come play Tri Peaks Solitaire free with Microsoft!

PYRAMID SOLITAIRE
♠️Combine two cards that add up to 13 to remove them from the board in Pyramid Solitaire.
♠️Challenge yourself to reach the top of the Pyramid and clear as many Solitare boards as you can!
♠️The newest edition to the classic games.

DAILY CHALLENGES
Play new solvable challenges in all 5 game modes with multiple levels of difficulty every day! By completing Daily Challenges, you will earn Solitare badges and rewards!

XBOX LIVE
Sign in with your Microsoft account to earn achievements and compete with your friends and family. Continue playing your card games on any compatible Windows 10 or Android device because your progress and game data will be saved in the cloud! Play Solitaire games free and seamlessly across all your devices. We even offer solitaire free for iPad and iPhones!

So when someone says, “Hey, where can I find Solitaire Classic Free?”, you can tell them that Microsoft Solitare Collection has ALL Solitaire games free!
Added new level images for levels 200, 300, and 400