Features and Screenshots TRANSFORMERS: Forged to Fight Game for Android 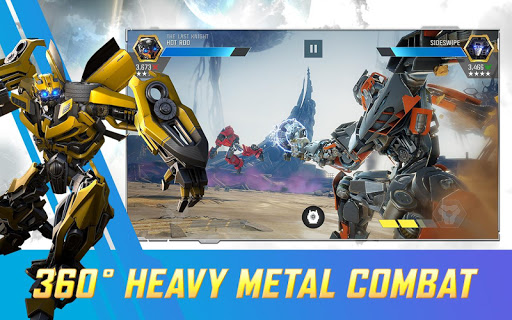 Join Optimus Prime, Megatron, Bumblebee, Waspinator, Rhinox, Grimlock, Soundwave and many more of your favorite bots in the battle for supremacy where Transformers universes collide. This exciting action-fighting RPG brings the heroic storytelling and spectacular action from over 30 years of Transformers history to your mobile device!

Features:
• Collect iconic bots from the entire Transformers universe
• Battle other players with devastating special attacks, ranged blasting, destructible terrain and huge 360° arenas
• Team up with your friends, forge alliances and battle in global events
• Set a gauntlet of bots and defenses to protect your base, get revenge on those that attack and raid enemy bases
• Deploy away teams to score epic loot

• Showcase Mode – You will now be able to try out a monthly featured bot in a Special Mission without having to own them first. Get a chance to experience what a fully maxed out Bot feels like in your hands.
• Mission Mastery – Players who have proven their worth in the Daily Missions will now be able to earn the rewards without having to play through the content each time.
• Added a link to our new Discord channel in the options menu.
• Fixed additional stability issues and various bugs.