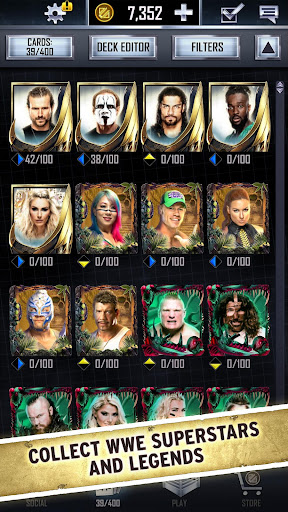 Collect and level up your cards. Design and build your deck. And experience the thrill of battle across a variety of modes, real-time events, and features like PVP and teams. Join the millions (and millions) of players across the globe who have downloaded SuperCard — and jump into its high-octane twist on CCG play.

SuperCard has old-school favorites like The Rock, Stone Cold Steve Austin, Bret Hart, Hulk Hogan, and current Superstars like Becky Lynch, The Fiend Bray Wyatt, Tommaso Ciampa, Adam Cole, Samoa Joe, and many more. There are thousands of cards to leg drop and Spinebuster into the virtual mat. Who will you place in your deck on your own road to glory?

… and things are just getting started in the latest Season. Season 6 offers more cards, team refinements, the totally new Performance Center, and all-new card leveling mechanics that shake up the action.

– Earn bonuses from logging in daily or taking Open Challenges

Do Not Sell My Info: https://www.take2games.com/ccpa
A new mode and event type enter into their respective rotations starting with this app update. Impress your friends with your LP gains by laying (lying?) the smack down in an all-new Men’s Division variant of the Elimination Chamber. And compete in a Women’s Division version of Giants Unleashed.